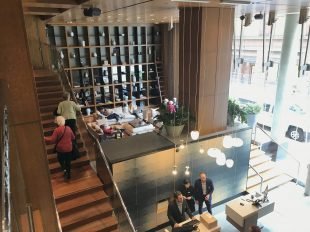 Our lobby at the Le Germain Hotel.

If you’ve been following along, you know our Canadian adventure began with three days at the Stratford Festival. Then, on Thursday morning, we boarded our charter bus to Toronto, and the Le Germain Hotel in the heart of the Entertainment District. One of the great treats of the Canada trip was the chance to enjoy both the small town atmosphere of Stratford and the big city energy of Toronto. Our hotel was a wonderful introduction to the city, both sophisticated and welcoming. We found those two adjectives to apply to practically our entire experience in Toronto.

We began exploring the city that afternoon, walking neighborhoods and visiting museums. At the end of the day, many of our travelers found dinner by heading over to the Distillery Historic District, a beautifully restored area that has been converted from a derelict collection of Victorian Industrial buildings to a vibrant collection of stores, galleries, restaurants, and theatres. That evening we headed to nearby Canadian Stage for a production of Lucy Kirkwood’s remarkable play The Children. More than one traveler wondered whether Chester Theatre Company might ever consider producing the play. Dear reader, we are considering. 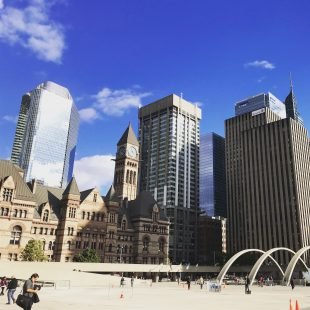 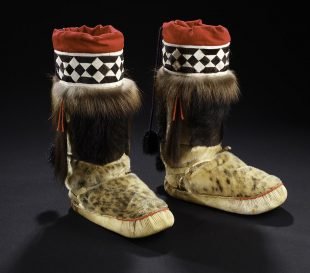 Friday morning after breakfast we gathered for a discussion of The Children. Further Toronto explorations brought travelers to places as diverse as St. Lawrence Market–an enormous indoor food market–and the Bata Shoe Museum. The Bata Shoe Museum is a small but remarkable collection with both historic and contemporary collectionsEarly foot coverings and protection from multiple cultures and traditions are represented, and the museum explores both the practical and the social and religious purposes of footwear. There were also beautiful exhibits of Manolo Blahnik shoes and boots, and of footwear from Arctic cultures around the globe.

That evening, we returned to the Distillery District to see Marco Ramirez’s play The Royale at Soulpepper, a vital Toronto theatre company housed in the Young Centre for the Performing Arts. The play looks at an early twentieth century African-American boxer, patterned after Jack Johnson, as he seeks then approaches a match against the white heavyweight champion. In the aftermath of his victory, there were striking parallels to current political circumstances. In our conversation Saturday morning, many of our tour-goers also commented on the striking physicality and, in essence, choreography of the production.

The rest of Saturday was an open day and evening, and we continued our explorations of the city, heading to other neighborhoods such as Yorkville, West Queen West, and Kensington Market–a terrific bohemian neighborhood drawing both artists and tourists to its indie shops, vintage boutiques, arts spaces, and restaurants representing an astonishing range of food traditions. There was even a restaurant featuring Hungarian-Thai food.

Then, Sunday, it was time to head home. We had enjoyed both settings, seen and discussed wonderful plays, and enjoyed the company of friends old and new. The mix of the Stratford Festival and Toronto proved ideal, and we all agreed this trip was one that Chester Theatre Company should do again. Perhaps that will be our chance to taste Hungarian-Thai food.