Downton Abbey meets Hitchcock, as Chester Theatre Company continues its 24th season with the British psychological thriller TRYST, by English playwright Karoline Leach. The production will run from July 11th to 21st at the Chester Town Hall in Chester, MA.

TRYST is set in Edwardian London, where a handsome con-man — going by the name George Love — courts women, marries them, then takes their life savings and disappears. His latest target is lonely hatmaker Adelaide Pinchin, but Adelaide has a peculiar effect on George, and almost nothing seems to go as he plans. Romance and suspense combine to create a tantalizing drama. As the twists and surprises grow, no one—not George, not Adelaide, not the audience—can be sure of the truth. The play becomes an investigation of illusion, reality, and the nature of love. 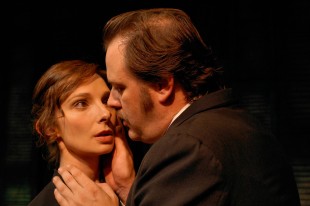 (L. to R.) Allison McLemore and Justin Campbell in CTC’s ‘Turn of the Screw.’

TRYST reunites two Chester Theatre Company favorites: Allison McLemore and Justin Campbell, last seen together in 2011, in CTC’s much honored production of The Turn of the Screw. CTC Associate Artistic Director Daniel Elihu Kramer, who helmed that production, joins the two actors again to direct TRYST. Ms. McLemore is also well known to area audiences for her performance as May in CTC’s groundbreaking 2010 production of The Nibroc Trilogy. When Ms. McLemore appeared in The Turn of the Screw, the Berkshire Eagle said “McLemore delivers a remarkable, exquisitely calibrated performance,” and Chris Rohmann in the Valley Advocate described “a performance of such sustained power, passion and subtlety that it left me breathless.”

TRYST was inspired in part by the true story of George Joseph Smith, whose criminal history is recounted in the 2010 book The Magnificent Spilsbury, by Jane Robins. George targeted young women, promising marriage, but leaving them with nothing. He was eventually brought to justice by Bernard Spilsbury, whose investigative methods paved the way for modern criminology. Playwright Karoline Leach was inspired by the story of George Joseph Smith to create TRYST, an imagining of one encounter between George and a particularly surprising young woman.

Karoline Leach (Playwright) is a British playwright and author, perhaps best known for her book In the Shadow of the Dreamchild, which re-examines the life of Lewis Carroll (Charles Lutwidge Dodgson), the author of Alice’s Adventures in Wonderland. This book and her subsequent work on what she terms the “Carroll Myth” have been major sources of upheaval and controversy in recent years and she has produced polarized responses from Carroll scholars and lay enthusiasts. Ms. Leach was born in Liverpool. She studied acting and worked as both actor and director in British theatre before becoming a writer. Her first professional produced work was an adaptation of Hans Christian Andersen’s The Snow Queen, commissioned by Orchard Theatre Company in 1989. TRYST began life as “The Mysterious Mr. Love,” produced in London’s West End in 1997. She revised the play as TRYST, and it opened Off-Broadway at the Promenade Theatre in 2006.

Daniel Elihu Kramer (Director) is Associate Artistic Director at CTC, where his previous directing credits include The Swan, The Turn of the Screw, and Gulf View Drive, the third installment of Arlene Hutton’s Nibroc Trilogy. Mr. Kramer also wrote the CTC hit Pride@Prejudice, which transferred to Capital Repertory Theatre in Albany in the Fall of 2012. CTC will present a staged reading of his new play Jane Eyre: A Memory, A Fever, A Dream later this summer. Mr. Kramer was a Founding Artistic Director of Salt Lake Shakespeare, Associate Artistic Director of Spiral Stage, and Assistant to the Artistic Director of Circle Repertory Theatre. Recent awards include an Elliott Norton Award for Outstanding Production for A Midsummer Night’s Dream at Boston Theatre Works, and Critics Circle awards for Best Production and Best Direction for The Pillowman at the Contemporary American Theatre Company. He is Chair of the Theatre Department at Smith College.

Justin Campbell (George Love) was last seen at CTC in the 2011 production of The Turn of the Screw. Mr. Campbell played a featured role in best film Oscar winner The Hurt Locker. He has worked with many of the world’s most eminent theatre directors including: Andrei Serban, Karin Coonrod, Liviu Ciulei, and Robert Woodruff.

Allison McLemore (Adelaide Pinchin) is a favorite with CTC audiences, having spent the summer of 2010 playing May in The Nibroc Trilogy. Her portrayal of Eliza Doolittle in Pygmalion won her a Denver Post Ovation Award. Other credits include: at The Mint Theatre Company; at The Pioneer Theatre Company; at The Olney Theatre; at Pennsylvania Shakespeare Festival; and at Pittsburgh Irish and Classical Theatre; and at Cincinnati Playhouse in the Park.

Tickets are available on CTC’s website: www.chestertheatre.org, or by phone at 1-800-595-4TIX. To receive a brochure, contact the CTC office at 413-354-7770. CTC performances take place at Chester’s Historic Town Hall, 15 Middlefield Road, Chester, MA. Performances are Wednesday through Saturday at 8:00pm, with matinees Thursdays and Sundays at 2:00pm. Tickets are $30 for weekday performances (Wed-Fri), $35 for weekend (Sat & Sun). Student, Chester Resident, and Saturday Night Rush tickets available; group rates for 10 or more are also available. For further information visit CTC’s website at: www.chestertheatre.org.

Chester Theatre Company, a professional theatre company located in the foothills of the Berkshires, produces 4 plays each summer, performed by top-flight actors, directors and designers from across the country.Under the leadership of Artistic Director Byam Stevens, CTC has earned a reputation for producing the best in contemporary theatre — 17 CTC productions have gone on to Off Broadway, regional, national, and international engagements in the last 16 years.  For further information go to CTC’s website, www.chestertheatre.org.
CTC performances are supported, in part, by the Massachusetts Cultural Council and the Local Cultural Councils of Blandford, Chester, Montgomery, Russell, Otis, Washington, and Worthington.
[sc:Yellow-Link url=”https://chestertheatre.org/wp-content/uploads/2013/08/TRYSTPRESSRELEASE.pdf” name=”DOWNLOAD PRESS RELEASE HERE” ]