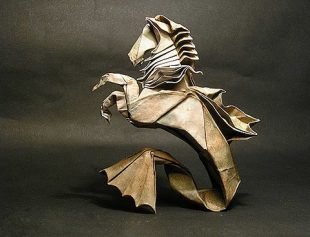 Chester Theatre Company will present Animals Out of Paper as the first installment in its 2012 Season — Uncommon Love Stories. This wise and richly layered comedy set in the fascinating world of origami folders, comes from Rajiv Joseph, author of the hit play Bengal Tiger at the Baghdad Zoo, which starred Robin Williams in its Broadway run. Animals Out of Paper, which The New York Times hailed as “Pitch-perfect… alternately wrenching and funny” opens July 5 and plays through July 15.

“There’s a saying in the theatre trade that all plays are love stories (sometimes the love in question is for money, power, fame, etc.),” according to CTC Artistic Director Byam Stevens “and our 23rd season will support that saying. But, there’s a twist — these aren’t your usual love stories, there’s not a conventional romantic comedy among them. Still, there’s plenty of romance and comedy and betrayal and magic and mystery – all the makings of great theatre from today’s best writers!”

Animals Out of Paper tells the story of Ilana, a world famous origami artist. When the play opens, her life is in disarray – she’s going through a divorce, her dog has run away and she hasn’t answered her phone in two months. Then her intercom buzzes. It’s Andy, a fan, a high school math teacher who counts his blessings. Literally. Andy soon introduces Suresh, an iPod addict and origami prodigy into Ilana’s life and the plot folds really get complicated.

Animals Out of Paper takes place in a very specific and unusual setting – the intersection of an ancient art form (origami) and cutting edge of mathematics. CTC has arranged for Mathematics Professor Thomas Hull of Western New England University to act as a consultant on the production. Professor Hull, who was featured in the PBS documentary Between The Folds, has been folding since he was eight years old. In addition to consulting with the director and cast, Professor Hull will give a talk at 7:00pm on Friday, July 6, as part of CTC’s First Friday Lecture series, which features faculty members of local universities in pre-show talks on the first Friday of the run of each production. Pieces of Professor Hull’s origami artwork will also be on display in CTC’s lobby gallery during the entire performance run.

Rajiv’s Joseph’s New York credits include: Bengal Tiger At The Baghdad Zoo (Broadway), Animals Out Of Paper (Second Stage), Huck & Holden (Cherry Lane Theatre), and All This Intimacy (Second Stage Theatre). He received the 2009 Kesselring Fellowship and the Vineyard Theatre’s Paula Vogel Award. Bengal Tiger At The Baghdad Zoo was named Outstanding New American Play by the National Endowment for the Arts; his plays have been published by Samuel French, Dramatists Play Service, and Smith & Kraus. He served for three years in the Peace Corps in Senegal, West Africa.

Elizabeth Rich (Ilana) is making her CTC debut, having been a regular at Chicago’s famed Steppenwolf Theatre Company where she appeared in A Tale of Two Cites, The Cherry Orchard, The Pillowman, and Oblivion. Elizabeth has played at topflight regional theatres around the country including Chicago’s The Goodman (A Dollhouse), Houston’s The Alley (The Scene) and Philadelphia’s The Wilma (Enemies: A Love Story). She was nominated for a Helen Hayes Award for Hannah and Martin at Theatre J in Washington, D.C. TV: Law and Order, Law and Order: SVU.

Chad Hoeppner (Andy) returns to CTC following his acclaimed portrayal of Raskolnikov in last season’s highly praised Crime and Punishment. He has appeared on Broadway in Come Back Little Sheba and Simon Gray’s Butley.  His many Off-Broadway credits include: The Mint Theater, Classic Stage Company, The Acting Company, Baryshnikov Arts Center, and the New York Shakespeare Festival. TV:  Law and Order: SVU, General Hospital. Chad will be pulling a theatrical double header at CTC this summer, playing Simon in Dipika Guha’s The Betrothed.

Vandit Bhatt (Suresh) is also making his CTC debut, though he played Suresh before, at Maine’s The Public Theatre. His New York credits include The Great Recession at The Flea Theatre, Hassan and Sylvia at the Cherry Lane Theatre and The Unusual Love Life of Bedbugs and Other Creatures at The Ensemble Studio Theatre. Regional work includes: Damascus (Northern Stage, Vermont), The Pillowman and Red Light Winter (Know Theatre of Cincinnati).